In Assignment 4 you created a rudimentary war game. In this assignment we are going to use class construction to improve upon it a bit. You will create a Card class. The Card class will hold all of the information about an individual card. This means the cards value and suit.

Additionally, we will create an enumerated type to relate the suit of the card.

For this first step you might want to create a new project called Assignment5 and then copy the code from Assignment4 into it. You don’t have to do this step but it is always a good plan to be able to roll back to a previous version. Once you have done this test your code and make sure it works like assignment 4.

Create a class called Card. You will need to make sure you have imported Image, ImageView, and javafx.scene.control.*. In the field of the class you will need to create the following private variables:

Create a private boolean method called loadCard that takes as an argument a String that represents the full path to the Image. This method should do the following

Create a public void method called setImage that takes as an argument a String that represents the path to the image to load. This method should do the following:

Create a public method called getCard that simply returns the Label that was created in the field.

At this point you should have a card that can be tested.

Inside the Assignment5.java (or whatever you called the main file) you should be able to create Cards and use them for the game. This involves the following:

Replace the code that creates the image with a new Card. We haven’t created constructors yet so you will need two lines of code to replace:

You will have to create a new Card and then call the setImage method to initialize the Card. You will then call the setGraphic method on the label this time you are going to supply it an image by calling the getCard method that is a member of the Card you just created.

Please note that you will have to do this for all of the Labels you have created. Also note that this is not quite ideal but we have abstracted some of the details. We will get to the rest as we go.

To make the card complete we need to keep track of both the Suit and that Cards value. To begin with create a java file called Suit.java. Inside this file create an enumerated type called Suit. An enumerated type is a way to relate a numeric value to a name. Like the days of the week are numbered 1 to 7 and correspond to the values Monday – Sunday. The enumerated type should simply look like the following:

Inside the Card class create a private Suit variable

to hold the suit of the Card. You might want to consider calling this variable suit.

In addition create a private int variable to hold the value of the card. You might want to consider calling this variable value.

Create a private method called getCardValue that takes as an argument a String that holds the path to the Card.

The getCardValue method’s purpose is to determine the suit of the card, and it’s value. You are going to have to extract the number of the card from the path and convert it to a numeric type. Consider King, Queen, and Jack to be worth 10 and the Ace worth 11.

Using the numeric value of the card determine the actual value the card has.  I will leave it to you to design an algorithm to do this but please do not have a switch statement that contains 52 cases. You should try to work out an algorithm that mathematically determines the value. You will undoubtedly need to use decisions but try to write the code as concise as possible.

In addition to this you need to determine the the suit of the card. You should set the value and suit created in the field from this method. The suit would be something like this:

At this point you should have a working Card class that will keep track of the suit and the value. It is not ideal at this point but is getting better. The last thing to do is to update the game so that it uses the value of the card instead of the name of the card.

Currently the game keeps score by adding one to the side that has the higher value card. This value is  simply determined by the name of the card. We have just created a method that will return the Card’s value so we want to use this method to determine which side wins. You are going to have to modify the decisions inside the handle method of the mouse clicked event.

We also want to change the score. Instead of adding one to the side with the higher value we now want to add the value of the card to the score. This means if the Card value is 10 the score will go up by 10.

At this point your game should work with the Card Class. It should also have updated scoring. 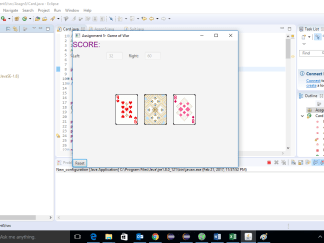