Subjects for study at a university Solved

For this task you will create a Subject class, whose instances will represent the subjects for study at a university. A subject will have a name, just a String (for example, Programming in java 1), and a subject code (for example, ITC206), which is a six-character String. The first three characters of a subject code are alphabetic and the last three are numeric. The first three characters define the subject’s discipline area. A subject code must be unique.

The following state and functionality should be provided for the Subject class:

An initial array of Subject objects will be created from any data in a file that was previously saved by the program. Then you need to read Subject objects from the file and store in appropriate array using your java program.
The user interaction will then proceed to allow the user to add one or more new subjects to the array. If the user wishes to add new subjects, the discipline areas of existing subjects should be displayed in alphabetically order. The user will then enter a discipline code to which the program will respond by displaying any existing subject codes in that discipline. This procedure simplifies the user’s task of choosing subject codes that do not already exist, but does not prevent user mistake. Each subject code entered by the user should be checked. The user can enter any new subjects in that discipline (or indeed in other disciplines). The user should be given the choice of repeating the processing for other discipline areas.
When the user has finished adding subjects, and only if subjects have indeed been added, the program will overwrite the data file with the updated data.
Note:

You may use an ArrayList to implement an array if you prefer and it is appropriate. 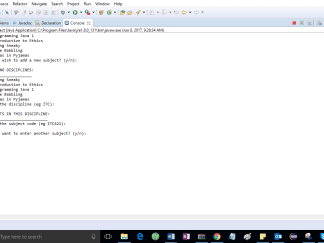 You're viewing: Subjects for study at a university Solved 30.00 $
Add to cart