For this assignment, each student will implement a chaining Hash Table. The key used for the operations specified as follows will be short strings, for example, the American last names in the attached file. Assume a string consists of k characters. s[i] represents the i-th character from left to right. We will try two hash code functions for strings: “djb2” and “sdbm” (http:

The graduate students should implement two extra operations for the Hash Table:

The different batch size of the inputs should be generated randomly, i.e, you should use a random shuffle function to shuffle the list of input strings, then choose the first 20000, 40000, 60000, 80000 strings to delete one by one. You can use random shuffle() function in C++ STL to randomly shuffle the list of strings. Please check the online reference about the random shuffle() function in C++ STL. For this delete operation, you should start with a Hash Table having all strings inserted. Write a record into a file for each delete. This record contains information telling whether or not the deletion is successful. If successful, display the bucket that the last name is deleted.

Running your program should produce a menu similar to the one shown in the example below. When loading a file with strings from the disk, all current entries in the Hash Table should be deleted, and the Hash table should be rebuilt.

the piece of code that you want to measure the time

“duration” is the execution time in seconds spent on the piece of code. If the number is too small, use duration = end−start instead. But you should use the same setting cross different experiments to make the running time comparable.

It is YOUR responsibility to make your programs workable and runnable by others under school’s UNIX environment.

djb2: This algorithm (k=33) was first reported by dan bernstein many years ago in comp.lang.c. Another version of this algorithm (now favored by bernstein) uses xor: hash(i) = hash(i−1)∗33str[i]; the magic of number 33 (why it works better than many other constants, prime or not) has never been adequately explained.

sdbm: This algorithm was created for sdbm (a public-domain re-implementation of ndbm) database library. It was found to do well in scrambling bits, causing better distribution of the keys and fewer splits. It also happens to be a good general hashing function with good distribution. The actual function is hash(i) = hash(i− 1) ∗ 65599 + str[i]; what is included below is the faster version used in gawk. [there is even a faster, duff-device version] the magic constant 65599 was picked out of thin air while experimenting with different constants, and turns out to be a prime. this is one of the algorithms used in berkeley db (see sleepycat) and elsewhere. 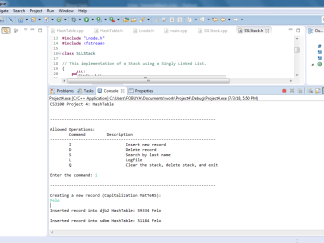