You should have 3 files (CellPhone.h, CellPhone.cpp & main.cpp) into a Zip file.

96 points (Allocation of points is shown in brackets below)

Create a class named CellPhone which will represent the code to manage a cell phone’s operating system. Split your declaration and definition into a header (.h) file and an implementation file (.cpp). (5) It must meet the requirements specified below:

The private member variables needed are:

• An array of structs of the type Contact (you must create this struct yourself) named contacts. Each struct should be able to store a contact’s First Name, Last Name, home contact

number and mobile contact number. Your class should be able to store a maximum of 200 contacts. (14)

• A variable of type string named display that will contain the text that the cell phone’s display will show at any time. (3)

• A variable of type bool named on that indicates whether the cell phone is turned on or not.

• A variable of type string named currentCall that contains the contact number of a currently active call. (3)

• A variable of type bool named callActive that indicates whether a call is currently active or not. (3)

• A function named showOutput that outputs the content of the display variable to the screen.

• A constructor function that sets the class variable on to true, and sets display to the message

“Welcome to the CIS3100 Operating System. Your virtual cell phone is now on.” (5)

• A function named dialContact that accepts an existing contact’s First Name & Last Name, searches the contacts array for this contact, asks the user whether they’d like to dial the home contact number or the mobile contact number, then stores the user choice in the currentCall variable. The contact number chosen should also be stored in the display variable. (14)

from the contacts array. After retrieving the contact, it should store the contact information in the display variable in the following format:

variable to “This device has been powered oﬀ” (5)

Please note that in the class above, anytime the display variable changes, the function

showOutput should be invoked/called in order to show the new content on the screen. (5)

30 Points (Allocation of points is shown in brackets below)

In a main.cpp file, make use of the class you create in Part 1 by including the class header file.

This main part of your program should perform the following steps:

2. Display a menu to the user with the following options: A. Turn oﬀ Cell Phone

and invoking the displayContactNumberInformation function.

D – Dial a contact by accepting the contact First Name and Last Name from the user and invoking the dialContact function.

The menu should be recurring on screen until the user chooses to turn oﬀ the cell phone, in which case the program ends. (15)

Consider carefully how you structure/organize this part of the program’s code. 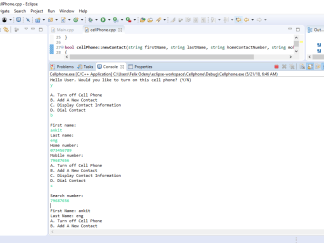