New concepts tested by this program

Use Graph to maintain a network of Actors

Within the Graph interface is a method dijkstraShortestPath.  You will be coding the Dijkstra’s Shortest Path algorithm.  You will then be able to find the connections between two actors through the movies that they have acted in.

For example, to connect Robin Williams to Charles Chaplin we might find:

The ShortestPath algorithm typically uses a weighted graph which means that the edges have a weight, and this is used to determine the shortest path.  For this implementation, each weight will be 1, so that the shortest path is based on the number of movies in the path.

You will be creating a class MovieEdge which will hold all the information for an edge and implements Comparable.  It contains a source and a destination, both are Actor objects, a weight (use 1 for the movie shortest path), and a String which holds the movie name that these two actors are connected by.  It must have methods of getSource() and getDestination() which return the Actor objects and getMovieName() which returns a String with the movie name for the JUnit Tests.  Follow the Javadoc html for MovieEdge. 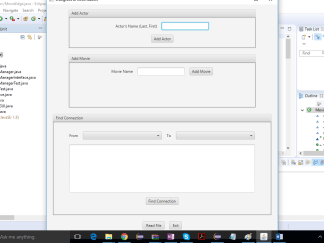